Posted by admin on July 25, 2013 in Community Outreach, Workshops | Comments Off on Makerspace Urbana meets a Children’s Maker Summer Camp 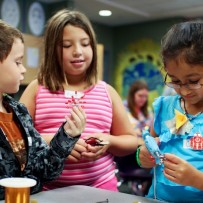