Comments Off on Pride Fest 2016

As an inclusive queer-friendly space, Makerspace members were super excited to participate in Pride Fest 2016! Building our float was a blast, utilizing making skills of all types, including woodworking, painting, audio engineering, and lighting. 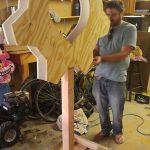 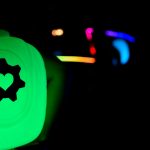 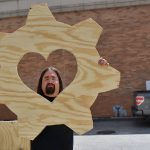 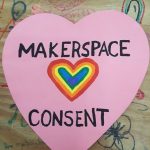 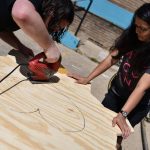 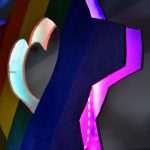 Comments Off on 2nd Place in RACES Fundraising Campaign!

Makerspace Urbana participated in the SOS RACES crowdfunding campaign to support Rape Advocacy Counseling and Education Services! As a feminist organization, we recognize that supporting RACES is critical to supporting the type of community we wish to build within our own space.

The Makerspace team raised $5,441 to support RACES, coming in second place for the team competition! 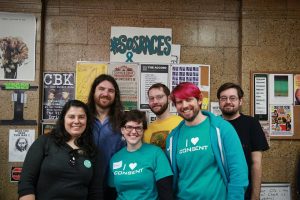 Comments Off on Countdown to Heartland Maker Fest

The Heartland Maker Fest is Makerspace Urbana‘s annual event celebrating the amazing makers in Urbana-Champaign and the surrounding communities.

Come learn to spin your own yarn, create art from math, or perhaps design and print a 3D object. This year’s fest will be full of family friendly maker fun and showcase all kinds of local maker talent.

You will also have a chance to hear many speakers discussing the maker movement and DIY phenomena.

And thanks to River City Labs Makerspace we’re also planning a Quadcopter Obstacle Course with prizes! If you have a small quadcopter that can be flown safely indoors, bring it!

This year’s Fest will be be held on Saturday, October 18 from 10am to 4pm at the Lincoln Square Mall in Urbana, Illinois.

Just a heads-up, we won’t have the space open tomorrow morning for our regular Open Hours.

Stop by our table in the parking lot by Kofusion, in front of the Orpheum kids museum.  We’re hoping to repeat the awesomeness that was last year: 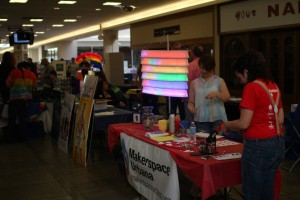 Comments Off on Outta the Mouths of Babes: Electric Waste Orchestra and Makerspace Urbana Episode!

We were super lucky to have Outta the Mouths of Babes , an amazing local youth radio project, come by with their youth correspondents and explore Makerspace Urbana and Colten’s Electric Waste Orchestra Project. Listen to the awesome results here:

And you can see more photos from the event here.

Last year the Children’s Discovery Museum’s education coordinator (Bethany Thomas) invited us to do a workshop with their Maker Camp. This year we were invited back to have more maker related fun with the wonderful kids at the Unity Community Center. Seven of our Makerspace Urbana volunteers were able to attend and we set up 3 different maker activity  stations for the kids.  One station was our classic soldering workshop! 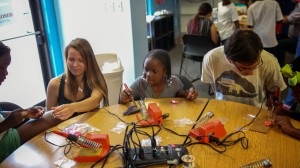 Soldering is Easy! And kids pick it up really quick. 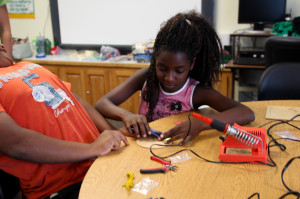 This girl quickly became an excellent soldering teacher after finishing her own blinky badge. 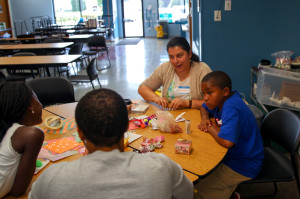 The new workshop station we were able to provide this time was sewing custom plush dolls! Huge thanks to Judy Lee from the Champaign-Urbana Community Fab Lab for helping teach and put this workshop station together. 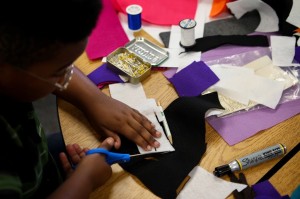 The kids got to cut out the patterns they created. 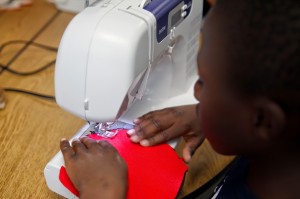 Learned to sew and stitch their pieces together. 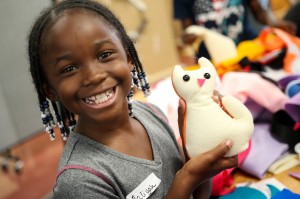 And ended up with some amazing creations!

Thanks to the all the awesome kids who made this event a memorable one for all of us.

Comments Off on T-shirts into Tote bags @ the Urbana Market

Makerspace Urbana is super excited to be invited back to the Art @ the Market booth this summer!  While we encountered a semi-tropical storm last weekend: 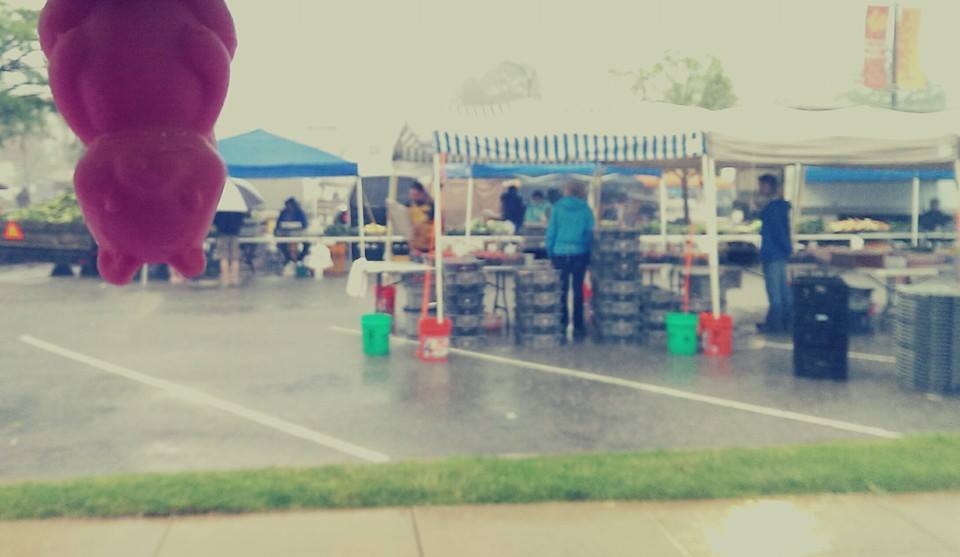 we will not be stopped!

Visit us this Saturday, July 19, 8am-noon at the Urbana Farmer’s Market; we’ll be right up front. 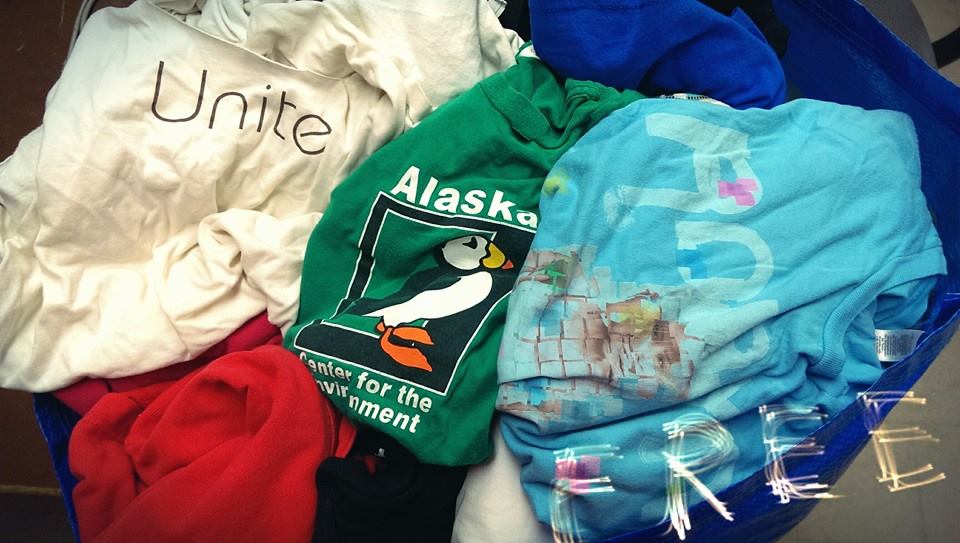 Did I mention this is a free workshop?

Comments Off on Makerspace Urbana represents at Tandem

If you don’t know what Tandem is, here’s a short description from the website:

Tandem: Champaign-Urbana’s Bicycle-Themed Poster Event allows the bicycle and design communities to combine their efforts in a way that will be mutually beneficial for both groups, and for the C-U community as a whole.  […] We’re inviting local and regional artists and designers to submit original pieces to be sold at reasonable prices ($20-40 suggested.)

The artists will keep 50% of the proceeds, and the remaining 50% […] will be donated to The Bike Project of Urbana-Champaign to help establish a cooperative bicycle shop in North Champaign.

Of course Makerspace Urbana had to enter.  A quick video of our submission is below: a mix of cross stitching, electronics, and touch sensitive thread. And it’s for sale.  Half the proceeds go toward the Bike Project and the other half will be donated to Makerspace Urbana! SO BUY OUR ART! It’s for two great causes.

Come check it out in action at Indi Go Gallery (9 E University Ave in Downtown Champaign).

Grand Opening is Friday, August 16th at 6pm.  The show will run until August 25th. 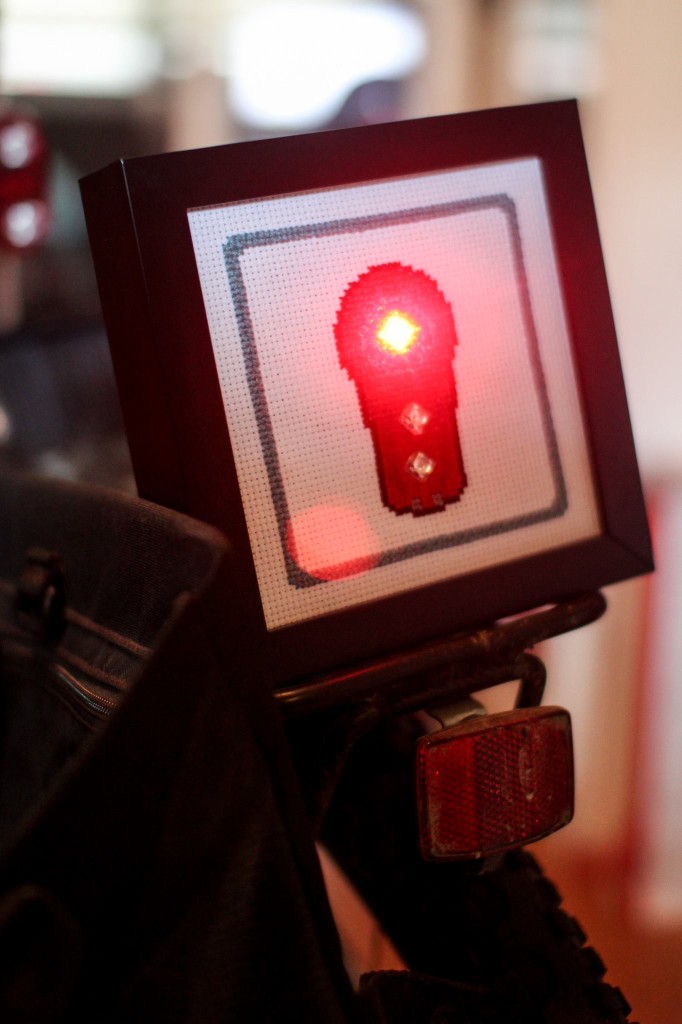 Art at the Market!

Comments Off on Art at the Market! 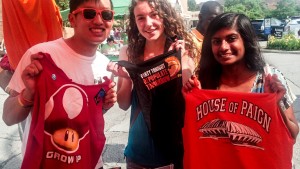 After last years successful “T-Shirt to Tote Bag” workshop at Urbana’s Market at the Square  we were lucky enough to be invited back to do it again. And it was a huge success, we started with a massive pile of shirts and actually ran out. That means their are now more reusable bags in the world and less old T-shirts. It’s really a win-win for everyone. And the extra T-shirt scraps were even donated to The Bike Project to be used as rags. Here is a brief description of the workshop be did:

T-Shirt to Tote Bag
Expand your collection of re-usable shopping bags by converting an old t-shirt into a tote.  No sewing skills required, pick a shirt and we will show you how to make the adjustments. Then, fill it with a harvest of Market goodies!

And a huge thanks to the Urbana Public Arts Program for sponsoring this event.